We were checking our wine stash and came across a bottle of Charles Krug Cabernet 2009 from Yountville Napa Valley that seemed to have “drink with tonight’s dinner” all over it!

Interestingly, we have no idea how a bottle of Charles Krug Cabernet 2009 ended up in our wine cellar.  Perhaps a spur of the moment purchase a few years ago, or more likely a weekend guest to our ski house at “Mad River Glen” in Vermont brought it and we just didn’t have a chance to open it.

Charles Krug is the name of a winery that has been operated by the “Peter Mondavi Family” for four generations! 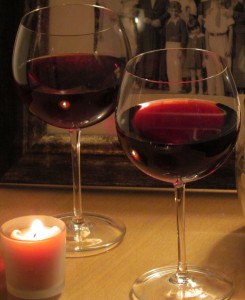 When this Charles Krug Cabernet 2009 was bottled that year, the Winemaker noted the following: “Our Peter Mondavi Family Cabernet Sauvignon provokes aromas of black cherry, raspberry and a hint of cocoa.  Flavors of black currant mingle with rose petals while supple, smoky overtones visit the back palate.  A silky mouth-feel and balanced tannins create an elegant finish to this classic Napa Valley wine.”

Our Pre-Dinner Tasting Notes
Not having enough time to properly let the wine breathe, we poured it through our trusty Metrokane Rabbit Wine Aerating Pourer and did a tasting.

The Cab resembled the winemaker’s notes quite well.  We observed the oaky, cherry aromas right quick, and the first taste had pronounced cherry and currant flavors coupled with some smoky, leathery aromas.  The wine was smooth, but still held significant tannins, telling us that it could have survived our cellar stash for a few more years.  Interestingly for a premium Cabernet, it wasn’t particularly leggy, but the great taste is all that counts!

The smoothness resembled a Cabernet Franc blend that would have been much higher than the 2% used, so the winemaker really did a great job here.

For dinner, we roasted lightly breaded eggplant slices until translucent, and then rolled them up with fresh mozzarella, combined the eggplant with some grilled Italian sausage sliced lengthwise in a baking pan, added a pint of our homemade tomato sauce, and then baked it all at 350 deg. For 30 minutes. Yum!

The Charles Krug Cabernet 2009 Yountville – Napa Valley was an outstanding match with our robust sausage, stuffed eggplant and tomato sauce entrée.  It had just the right acidity to cut the oils in the dish without overpowering the mildly spiced eggplant and mozzarella.  This wine would also go great with any serious steak, or pasta dish, but it’s way too good to couple with anything barbeque.

As we mentioned earlier, we have no idea how we ended up with Charles Krug Cabernet 2009 in our cellar, but we sure hope that the wine “god” bestows some more on us!