From the Asti Winery, Sonoma County, California, this review is of Cellar No 8 Cabernet Sauvignon 2011.

Alcohol content of Cellar No 8 Cabernet Sauvignon is 13.0% according to the bottle. 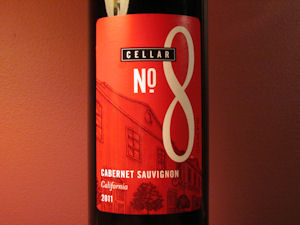 For this review, I again enlisted help from “Big Al”, who is always good at finding great wines at a great price point.  Retail for Cellar No 8 Cabernet Sauvignon is about $7.99.

In appearance, this red wine is black cherry in color with a purple meniscus.  It’s a fairly leggy Cabernet Sauvignon with thick, slow falling legs.

On the nose, Cellar No 8 Cabernet Sauvignon is quite complex and very aromatic.  We noticed some fruitiness with hints of cinnamon, black licorice and coffee.  There was a slight tinge of alcohol in the aroma, but it was not at all overwhelming.

Upon sipping, we noticed flavors of mostly black cherry and perhaps a hint of plum.  It was a fairly smooth wine and not as dry as some Cabernets can be.

Spicy tannins were felt all over the mouth and were a bit tingly.  Cellar No 8 Cabernet Sauvignon presented a silky mouthfeel.

The wine had a medium and enjoyable finish.

Overall, we found this wine to be a very approachable smooth sipping Cabernet Sauvignon.  Great for cold season sipping while sitting by a fire.  It may get a little washed out with a spicy dish or a pepper rubbed steak.  But, the final quote of the night was “This wine is up my alley!”  Recommend!