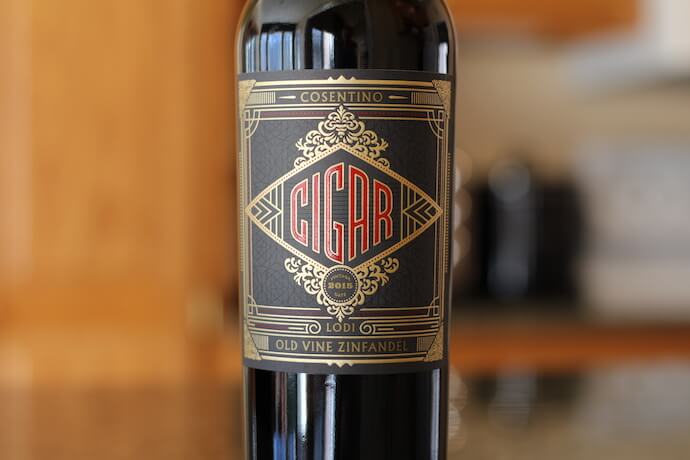 The wine is 100% Zinfandel and is sourced from Lodi.

The winemaker is Marty Peterson.  In the letter he sent to reviewers he was clearly proud of both the wine and the labeling.  He said the 2015 is the first vintage of Cigar Zinfandel to carry the Lodi appellation and its unapologetic big bold flavor.

For more about this wine check out the Cosentino Winery website.

From the tasting notes:

… a powerful Zinfandel that exudes confidence and elegance while balancing rich, ripe fruit.

The fruit for this wine was cold-soaked before a fourteen-day fermentation.  The wine was aged for eight months and partially in French oak.

I tasted the 2015 vintage of Cigar Old Vine Zinfandel.

Although the marketing material suggests a very dark wine, it wasn’t as opaque as I was expecting.

It’s dark, but some light does shine through.

I would describe the color as dark plum.

It’s plenty leggy and coats up the glass well.  The legs fall extremely slowly down the sides of the glass.

The wine is quite aromatic and I was able to get a consistent whiff from afar.

The nose is complex with hints of wood smoke and allspice.  There is a bit of pungency to the aroma as well.

There isn’t much if any alcohol burn in the nose, though.

Cigar Old Vine Zinfandel alcohol content 15.5% per the bottle.  That’s fairly high and I was quite surprised (and pleased) that didn’t come through in the aroma.

The wine’s taste starts out very dark and rich with ripe black fruits.  From there it moves to more of a bright red fruit flavor.

Inside all of that you get notes of cocoa and dark coffee, plus plenty of black and red fruits.

Tannins were present but supple.  I felt them mostly on the tongue.

Being as big and rich as this wine is, it wasn’t a surprise that the wine had a long and lingering finish.

There was just a bit of bitterness in there, but the flavors definitely carried the finish.  Allowing the wine to breathe didn’t reduce the bitterness.

What impressed me the most about this wine was the fact that so much flavor came from 100% Zinfandel.  This wine reminded me of a red wine blend that would have had to “engineer in” all that flavor and boldness.

From what I understand, this shouldn’t be a surprise due to this being a Lodi Zinfandel.  They’re said to be known for such deepness in flavor.

Something else that didn’t escape me was the wine’s marketing to guys.  The labeling being the big giveaway.  Having said that, yes, I could definitely see sharing this wine with my buddies and all of us liking it.  It seems to hit that certain sweet spot nicely.

Recommend!  But, maybe let it age a bit to reduce the bitterness in the finish.

The tasting notes suggest pairing this wine with steak or BBQ.

Sounds perfect to this guy!