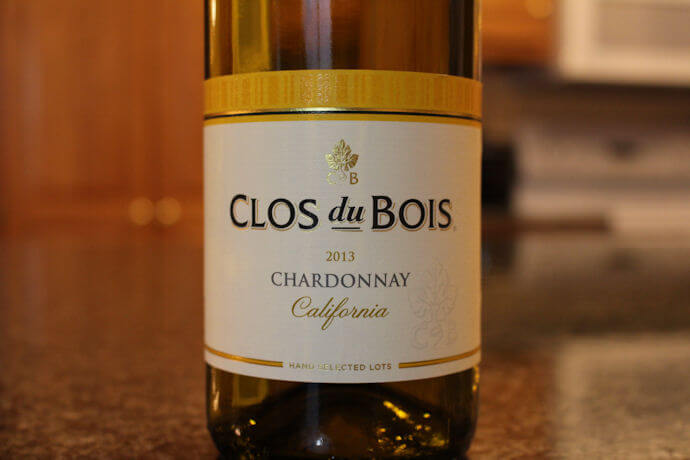 In this review of Clos du Bois Chardonnay we’ll go over the price, alcohol content, taste and more of this California Chardonnay.

Clos du Bois was founded in Sonoma County, California by Frank Woods in 1974.  His vision was to combine French winemaking techniques with the best Sonoma County fruit to create wines that were approachable and balanced.  His inspiration came from traveling the wine regions of France.

Moving forward to the present, Clos du Bois partners with local growers in Sonoma County and Coastal California.  They share their 40 years of knowledge with those growers and farm close to 800 acres to produce the fruit for their wines.

They’re proud of their sustainability as well, including powering their winery via solar energy and minimizing water consumption in their farming practices.

They also compost left over skins, seeds and grape pulp and return that compost to the vineyards.

For this review, I joined up again with “Big Al” who has helped with previous reviews and has a great palate.

We tasted the 2013 vintage of this wine.

The winemaker for this vintage is Gary Sitton and the varietal is 100% Chardonnay (not a blend).  It’s aged in 30% French oak and 2% American oak.

According to the tasting notes, the 2013 growing season yielded high quality grapes that matured in a slow and steady fashion.  This resulted in full flavor development and tannin maturity.

“Our classic California Chardonnay offers flavors of apple, pear and lemon, with hints of butter, toasty oak and spice.  Pour a chilled glass to unwind at the end of a long day or sip with family and friends at a party of any size.”

In the glass, this wine is golden in color with no bubbles appearing in the wine.

The aroma was noticeable when first poured from a good foot away from the glass.  It was like a burst that dissipated fairly quickly.

We had slightly different experiences in terms of what we noticed.  While we both noticed pineapple, I also noticed a hint of lemon.  Big Al quantified it as peppery pineapple.

We both noticed a good burn from the alcohol.

I noted sweet tropical fruits, but they were very subdued.  I described it as “diluted pineapple.”

For Big Al, he felt the pepper from the aroma carried through to the flavor.  He also said he perceived a smooth vanilla-like flavor.

We both felt the flavor was not oaky at all, even though the wine did go through some oak aging.

We both thought the wine had a luxurious and silky mouthfeel.

The finish was long lasting and enjoyable.  For me, it was noticeable all over the palate and for Big Al, more towards the back.

Overall we were both impressed with Clos du Bois Chardonnay.

Additionally, I enjoyed the wine’s subtle sweetness and its long and enjoyable finish.

Big Al called it “good and enjoyable” and he liked the subtle sweetness the most.  He felt it reminded him of a Riesling and said it would pair well with a Crème Brule or a Tiramisu.

For this wine, I happily agree with Clos du Bois’ recommendations, which are to pair this Chardonnay with “fish prepared in lemon butter sauce, pasta in cream sauce, and herb-roasted chicken.”