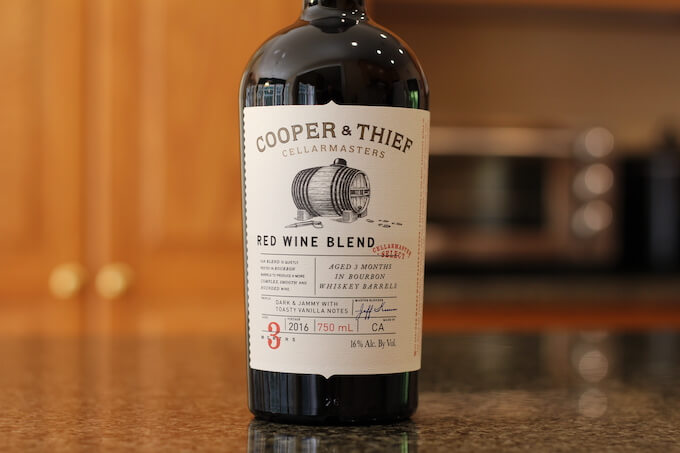 Wow…  Quite a lot of varietals in the blend!

But, does it add to the wine’s complexity or perhaps tamper down the bourbon flavor?

According to the bottle label, the wine was aged for three months in bourbon whiskey barrels in order to produce a more complex, smooth and rounded wine.

With that said, I’ve tasted bourbon barrel aged wines in the past that were FAR from being smooth.

Cooper and Thief calls the flavor profile of this wine “Dark and jammy with toasted vanilla notes.”

Here’s another quote from the bottle label:

Cooper and Thief is a rich wine with warm vanilla flavors and some subtle spicy notes.  It finishes with a smooth mouthfeel reminiscent of a fine bourbon.

And one more thing…  This review actually comes from a reader request.

A reader named David called this a “port like” wine and suggested I check it out.

I headed to my local wine store, picked up the 2016 vintage of this wine and now I’m pleased to give you this review!

To start, the bottle itself was not shaped like the usual wine bottle you find on your store shelves.

As you can see from the picture above, it’s similar to what small-batch bourbon bottles look like these days.

Some slick marketing going on there!

In the glass, the wine poured inky black purple in color.

Legs were slow to fall and quite thick.

Of course, the first thing I wanted to see was if the wine had a bourbon-noted aroma to it.

It didn’t and I was pleased by that.  I’ve sniffed some bourbon aged wines in the past that really lit your nose up!

Speaking of the nose, the dominant notes were Fig Newton cookie, black cherry and a hint of allspice.

Quite enjoyable and very little alcohol burn, which was surprising given its alcohol content.

Cooper and Thief Red Blend alcohol content 16.0% by volume per the bottle.

On the palate, Cooper and Thief Red Blend is quite sweet and flavorful.

The best way to describe it, is flavors of vanilla infused maple bourbon, with some very ripe black cherry and plum.

This is the kind of wine that you need to be careful with, since it goes down so smooth and quick.

The 16% alcohol content will catch up with you, so be prepared!

With this wine you get a very silky mouthfeel and “barely there” tannins.

The finish is quite long-lasting and vastly dominated by its flavors versus its tannins.

Overall, this wine is a jammy flavor bomb!  It’s delicious and over the top decadent.

But, if you’re more of a red wine purist, I think you’ll find this wine too sweet.

And I have to say, David (the reader who suggested I try this) was spot on.

He said it was “port like” and that’s an excellent description, in my opinion.

This one’s a bit tricky when it comes to a pairing suggestion.

But, I would also give it a try with barbecued ribs with a sweet smoky sauce.

What do you think?

Have you tried this wine?

Leave a comment below, I’d love to hear your thoughts on this unique wine.