From the California Central Coast, this review is of Cupcake Pinot Noir 2012.

Cupcake Pinot Noir surprised me and also my friend who was helping me with this review.  We thought for sure that this wine was a Pinot Noir blend.  However, after looking at the bottle and tasting notes, we discovered it’s not.  It’s pure Pinot Noir.

They also go on to say that they “harvest their Pinot Noir grapes at their peak and cold soak them for a couple of days.  After yeast inoculation, the juice undergoes a cool fermentation” process to preserve the fruit.

Alcohol content of Cupcake Pinot Noir is 13.5% according to the bottle. 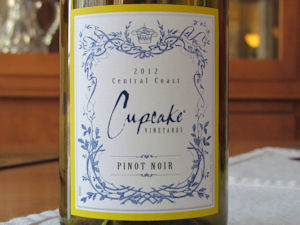 In the glass, the wine’s color was a very dark plum.  Almost black in the middle.  With the exception of a few slight red reflections, very little light was able to shine through the wine.

Cupcake Pinot Noir is pretty leggy.  We both noted several quick falling tears along the glass.  Legs were thin.

The wine’s aroma was noticeable from afar upon the initial pour.  Not so much after sitting in the glass a bit.  We noticed a little bit of spice and little bit of clove.  My friend said that he noticed caramel initially, but it faded.  I noticed a bit of a sting of alcohol in my nose.

We really diverged on our opinions of the flavor of Cupcake Pinot Noir.  I noticed caramel in the taste.  He noticed a bit of spice but also bitterness and what he called a void of flavor.  He didn’t notice the caramel.  He did want to stress that his palate may have been jaded due to just having a very flavorful dinner.

After our review we went back and looked at the back of the bottle and it said that the flavor was “reminiscent of a cherry cupcake.”  For me, that may have been what I was sensing as the caramel flavor and he had noticed in the aroma.

Tannins were bright but mild.  We noticed the tannins on the back of the tongue and inside upper lip.

We described the mouthfeel of Cupcake Pinot Noir to be of cotton or linen.

We both agreed the wine had a lonnnnnggggg finish!  It went on and on.

Overall, I really liked the wine.  My friend was a bit more lukewarm but he did say it was “good”, in his opinion.  He said he had expected more fruit and flavor, in general.  I thought the hints of caramel and long finish made for an enjoyable wine tasting experience.  Given the smoothness and slight sweetness of the wine, I was really expecting that Cupcake Pinot Noir had some Zinfandel in it.  But, as mentioned above it did not.

One of the most commented wine reviews I’ve done so far is Cupcake Red Velvet.  It’s become a bit controversial because some people are noticing a non-natural taste with that wine.  When I reviewed it, I didn’t notice that and actually really liked the wine.  Conversely, many people also commented that they too really liked the wine.

I was really curious to see if we were going to encounter a non-natural taste with Cupcake Pinot Noir.  Neither of us did.

So, with all that said, I’m giving Cupcake Pinot Noir a cautious “Recommend“.  I enjoyed it, but would be curious to hear what others think and would encourage everyone to speak their mind in the comments section below.