This review is of J Lohr Wildflower Monterey Valdiguie 2012 produced at Paso Robles, California.  I hadn’t heard about this wine or varietal until my old high school chum Dave told me about it.  He had a lot to say about it so I invited him to help out with this review and he did a great job!

According to J Lohr Estates, the Wildflower Monterey Valdiguie is sourced 100% from Valdiguie fruit.  They say that the Valdiguie is a very large-berried grape that needs extra care when pruning.  They prune it down to only one bud per spur and thin the shoots aggressively in order to prevent the yields from becoming too high.  They also say that Valdiguie is a late-maturing variety.

On the back of the bottle they say the J Lohr Wildflower Monterey Valdiguie is “similar to the Gamay wines of France’s Beaujolais region.”  Alcohol content of J Lohr Wildflower is 12.5% by volume and it’s a twist top.  Best served slightly chilled, per J Lohr. 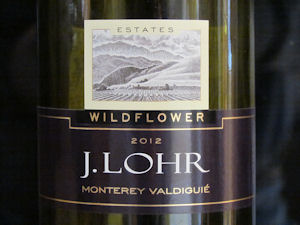 In appearance, this wine is purple in color and a bit dark.  A little light shines through it, though.

I noticed when poured, this wine exhibits some bubbles in the glass.  Not nearly as much as a Lambrusco would, but noteworthy nonetheless.  No carbonation, however.

It’s a leggy wine, with many quick moving tears falling down the sides of the glass.

Aroma of J Lohr Wildflower was noticeable right away and from afar.  Not overly sweet on the nose.  Dave and I both agreed it would be described as cherry or black cherry.  Very pleasant.

Upon tasting the wine, we both expressed how much we felt this was a very enjoyable wine.  However, we were unable to nail down the flavor.  After some laborious wine drinking :-) we decided to cheat and look at the bottle.  Which I hate to do during a tasting!

Pomegranate and berry was the answer.  I’m not so sure Dave was convinced that’s what he was tasting, but I was swayed.

Most importantly, we both loved the taste and had a couple quotes…

From Dave:  “Perfect for someone transitioning from a white wine drinker to a red wine drinker.”  He also described the flavor as “clean.”

From myself:  “It tastes like what you would imagine wildflowers would taste like.”  I know… corny.  But, hey, that’s what came to mind.

Tannins of the J Lohr Wildflower Valdiguie were soft and “comfortable” (so sayeth Dave) and noted on the tongue.  No bitterness at all.

We agreed the wine had a silky mouthfeel.  Finish was medium to long.

Some more quotes of the evening were “delicious” and “a best kept secret from the quality to the ridiculously good price (about $10).”

Also, Dave had some previous experience pairing this wine with different foods.  He said that “it plays nice in the sandbox with food, going well with ham, pizza, steak, breaded chicken, turkey, chocolate…  you name it.”

I’m so glad my friend told me about this wine.  Highly recommend and so pleased with the low price!