This review is of Justin Cabernet Sauvignon 2011 from Paso Robles, California.  For this review I had help from a tasting assistant, Miss Jonelle, who has assisted in the past and always does a great job helping out.

According to the Justin Cabernet website, the grapes for this wine are picked by hand and then sorted by the berry for the best flavor and quality.

They also state that for this particular vintage, the buds broke a couple weeks later than usual.  The weather that spring caused what they called an “uneven fruit set” and naturally limited their yields without having to manually thin them.

A cool summer and warm early fall also contributed to a lower yield, however they felt the season overall yielded “great results.”

And finally, they said that Justin Cabernet Sauvignon “spends more than a year in traditional small oak barrels to impart a depth and complexity to the wine that expresses the influence of the ancient limestone soils and unique climate of Paso Robles.”

Alcohol content of Justin Cabernet is 14.0% according to the bottle. 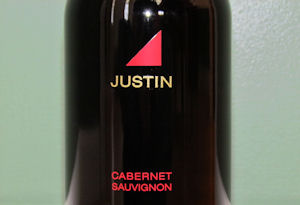 In appearance, Justin Cabernet is very dark in the glass.  Color is of deep plum and very little light shines through this wine.

The wine was leggy, with most legs being thin and at mid glass level.

We had differing opinions on the wine’s aroma.  For Miss Jonelle, she mostly noticed a slight burn in the nose and very little else.  She called it non offensive but also non appealing.

For myself, I didn’t notice the alcohol sting in my nose.  I described the aroma as an earthy mocha with a bit of pipe tobacco.

On the palate we didn’t notice any intricacies of flavors.  It was described as “looks and tastes dark” and “starts smooth, then goes to dry.”

Tannins of the Justin Cabernet were bright and felt mostly on the tongue.

We both agreed the finish of the wine was long.  There was not a strong aftertaste.

Overall, we felt Justin Cabernet Sauvignon was a little one dimensional.  A medium bodied wine that we thought would go good with a steak or strong cheese.  Probably not a sipper on its own but all in all a good wine.