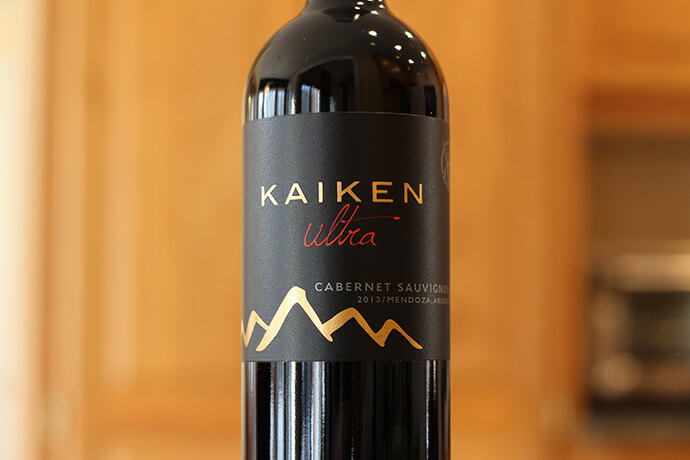 It’s produced and bottled in Mendoza, Argentina and was aged for 12 months in French oak barrels.

Kaiken is a wild goose that crosses over the Andes between Argentina and Chile.

For more information about this wine, check out the Kaiken Wines website.

And, if you happen to like Malbec from Argentina, check out my Kaiken Malbec Ultra Review from the same winemaker.

I tasted the 2013 vintage of Kaiken Ultra Cabernet Sauvignon.

In the glass, this wine was dark red in color.  It did allow some light to shine through and leave lovely red reflections on the table.

It’s certainly a leggy wine.  It took a minute for the legs to form.  Once they did, they were thick and slow to fall.

Interestingly, they were evenly spaced and there were two waves of legs that formed, one set after the other.

The wine’s aroma was quite complex!

There was an initial burst of red fruits, like raspberry and cherry candy.  Following that were smokier hints of spicy black pepper and tobacco.

I was unsure if the sting in my nose was from the spice or from the alcohol.

Overall, this wine is wonderful on the nose.

I found this wine’s flavor profile a little tricky to characterize.

I initially noted bell pepper that quickly washed out.

After giving it some thought (and with a little help from the WSET Wine-Lexicon) my best description was herbaceous and vegetable flavor characteristics with a little bit of under-ripeness.

I decided to go ahead and read the tasting notes I was sent after tasting the wine.  In those notes, Kaiken recommends a 30 minute decanting period.

So, after some time away from the glass I came back to it.  What I noticed was that the wine took on a little blackberry in its flavor and some of the under-ripeness dissolved.

Also, I think most people will call this one a “dry red.”

The wine’s mouthfeel was cottony with fine grained and long lingering tannins.

The tannins really seemed to “settle in” to the nooks and crannies in my mouth!

Kaiken Cabernet is very long finishing and the majority of the finish is dominated by the tannins.

This is one of those wines where the tannins really pick up as the flavor drops off in the finish.

Overall I enjoyed this wine, however, I was left a bit confused by the flavor and there was an “out of balance” feeling as I tasted this wine.

It was as if the different aspects of this wine were competing with each other for attention versus balancing each other out.

Now having said that, if you like to really dig in and analyze a wine (like I do!) you’ll probably have fun with this one.