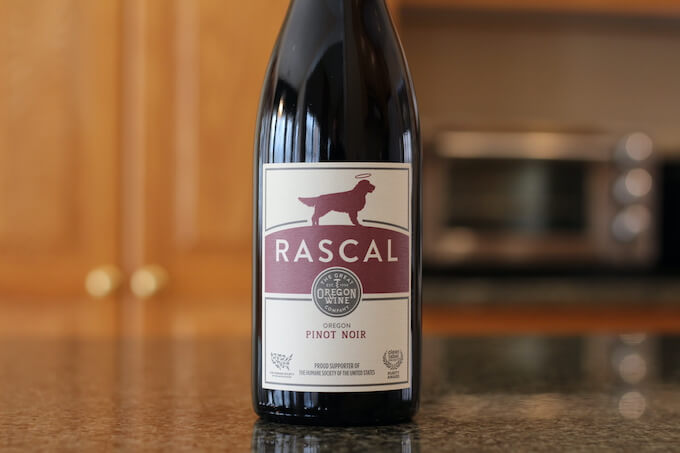 They call Rascal the wine for dog people.

Why?  Because some time ago the winery had a Golden Retriever named “Rascal” who greeted visitors at the vineyard.

He’s since passed, but his memory lives on.

You may even notice the halo over Rascal’s picture on the bottle label.

I should point out that this is the second time I’m reviewing this wine.

The folks at Great Oregon Wine saw my first review of the 2010 vintage and were kind enough to send me a sample bottle of the 2018 Rascal Pinot Noir for me to review.

So, towards the bottom of this review you’ll find my thoughts as to how the 2010 and the 2018 compared.

I should also mention that I purposely didn’t look at my review of the 2010 before tasting the 2018.

I didn’t want to have any preconceived notions going into this new review.

Great Oregon Wine tends to source fruits for Rascal from all over Oregon.

Including the Willamette Valley, the Umpqua Valley and other areas.

In the glass, the wine was clean and cherry in color, as is typical of Oregon Pinot Noir.

Legs were thin and slow to fall.

Overall, Rascal Pinot Noir is certainly an aromatic wine, with the bouquet noticeable from a few feet away from the glass.

On the nose, I initially sensed vanilla, likely from the oak aging.

After that, raspberry notes were dominant along with some subtle tobacco.

There was also a mild whiff of alcohol.

There were obvious red raspberry notes, with a darker, vanilla layer in the flavor.

A fresh pour brought out more of the vanilla and plum notes.

Overall, I found the wine to be quite tasty and easy-drinking and maybe even a bit juicier than other Oregon Pinot Noir I’ve tried.

I found the wine’s mouthfeel to be juicy.

Tannins were restrained, but lingering and felt all over the palate.

The wine finished medium to long with a nice transition from the flavors to the tannins, which settled finely on the palate.

I suspect this wine was well-filtered, given the subtlety of the tannins.

Overall, I found this wine to be very enjoyable.

Many Oregon Pinot Noirs are singularly cherry oriented, however this one did a nice job of smoothing out its ripe red fruits with a lovely vanilla sheen.

I also believe this wine would age well, as it was still fresh and clean three years later.  And after sitting in my wine rack for a good year at room temperature.

Rascal Pinot Noir price $15.00, making it a nice under $20 selection for your own wine rack.

Rascal is great on its own as a sipper or you could pair it with a tasty lobster ravioli.  Yum!

So, as mentioned above, this review is an update from the review I did of the 2010 vintage of Rascal Pinot Noir.

Here’s what the 2010 Rascal Pinot Noir bottle looked like:

Note, even back then it had Rascal the Golden Retriever on the bottle label, with his halo. 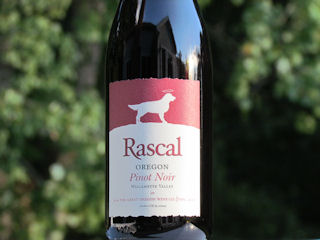 I won’t repeat the full review I did for the 2010 vintage, but here are the main differences between the two:

And that’s it…  I hope you enjoyed this review!