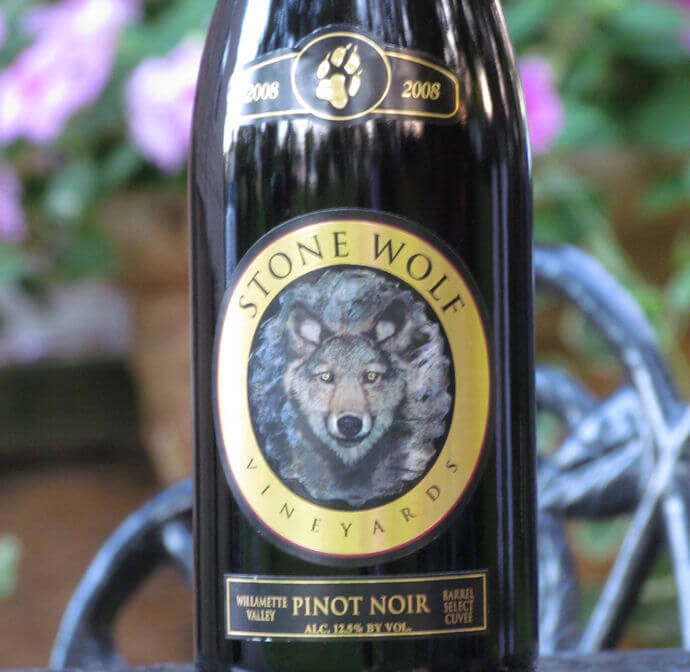 In a previous post I mentioned that my curiosity about Oregon wines remained and that sometime I would try another wine from that region.

So, a friend and I (let’s call her Miss Jonelle) embarked on tasting this 2008 barrel select cuvee from Stone Wolf.

The label was impressive with the stone wolf looking you in the eye.

Similar to the last Oregon Pinot I tried, the aroma of this wine also had a good whiff of alcohol.  However, there seemed to be hints of cherry as well.

The legs were minimal, but, there was a curious waterfall of bubbles suspended above the wine on the glass.  Our swirls to circulate the air weren’t aggressive so we wondered what was going on?  I thought it might have been sediment, but it wasn’t.  Just a curiosity that made good conversation.

The wine was light in body and the color was what you’d expect for a light Pinot Noir.

We described the mouthfeel as cottony, not silky.  But it did glide over the tongue.

I would describe the taste as buttery to start with a hint of cherry.  Miss Jonelle and I both noticed that the wine surprised us in that the alcohol nose did not carry through to the taste at all.

Though not complex, Stone Wolf was consistent in taste and we both liked the flavor.

It finished smooth and round.

We both thought this wine would go great with a flavorful fish, chicken or a light pasta dish.  Not with a red sauce, however.

After tasting, we nibbled on a strong cheddar, crackers, cherries and a fig spread.  We both agreed that much of the characteristics of the wine got lost after we ate the strong cheddar.  I think the wine is a great sipping wine on its own.

Overall, I was really impressed with Stone Wolf Pinot Noir and would buy it again.

Looks like my tour of Oregon wines needs to continue as I found this wine to be completely different than the other Willamette Valley wine I tried.  I wonder what the next one will be like?