According to the bottle, the grapes for this wine come from old vine Garnacha vineyards.  The growing conditions are said to be on “rugged terrain on the slopes of the famous Moncayo mountain.”

The Garnacha grape, per the Wine Bible, is native to Spain and is a widely planted grape in that country.  It’s also often used in blends due to its big body and jammy flavors.

This particular wine is not a blend and is 100% Garnacha according to the tech specs.

Tres Picos Garnacha comes from Bodegas Borsao and has won many awards, including several from the Wine Advocate.

Alcohol content of Tres Picos Garnacha is 13.5% according to the bottle.

This wine was given to me as a gift from a good friend.  He hinted he was very interested in seeing how this review would go. 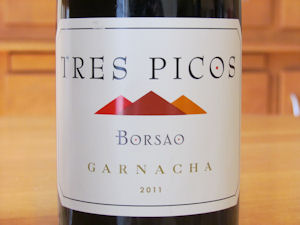 In the glass this wine is deep ruby in color.  It’s quite dark and very little shines through.

Aroma of Tres Picos Garnacha was heavy with lots of jammy fruits and a good whiff of alcohol.  I also noted hints of black raspberry.

The black raspberry carried through to the palate along with other jammy black and red fruits.  Tres Picos Garnacha is full bodied with a good amount of complexity.

Biting tannins were noted on the top of the tongue and the wine had a mouth coating viscosity.  The tasting notes for this wine say the tannins are soft and silky, however I disagree with that evaluation.

The wine’s finish was very long and quite enjoyable.

Overall, I really liked Tres Picos Garnacha.  It’s a great red wine from Spain that lives up to the expectation of the big and boldness of the Garnacha varietal.

I also liked the fact that it is a straight Garnacha and not a blend, which really allows you the full experience of a bold Garnacha.  Give it a try!