WillaKenzie Estate Pinot Noir comes to us from the Willamette Valley of Oregon.

The Willamette Valley, south of Portland, is one of the most well known regions and home to many of the top wineries.  The climate has been compared to Burgundy, France due to the amount of rainfall and cool weather received.

According to the bottle, WillaKenzie Estate Pinot Noir is produced entirely from fruit grown from multiple sites at the estate.  It’s aged in French oak barrels for 10 months. The bottle retailed at about $30 and had a screw top.

For this review, we tasted the 2007 vintage of this wine.

Our tasting team consisted of two men and two women.  As it turned out, the men’s verdict differed from the women. 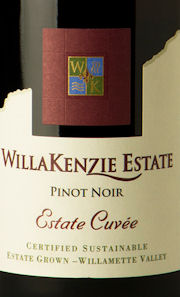 To start, there was not a discernibly unique aroma to the WillaKenzie Estate Pinot.  However, two people noted that the aroma grew to be a bit “earthy” as the wine took in some air.

The wine had some legs but was mostly light in body.

Appearance was described as ruby red with a little brown thrown in.

The flavor, upon first sips, gave hint to the taste of alcohol.  One person described this as “warming.”

As time went on and the wine had time to breathe, we all noticed less of that.

One person reported the finish to be “green.”  Another noted that the wine seemed to become more dry with air.  Still another noted a similarity to Chianti.

As more time went on, some started to note hints of berry in the wine.

Our team’s host had a variety of cheeses for us to try.  After pairing the WillaKenzie Estate Pinot with several different types of cheese, we all noted a mellowing to the wine and other flavors came through.

So, bottom line, the guys liked it with time.  The ladies weren’t as thrilled.

I think this wine definitely needs to be decanted for awhile before being consumed.  There are subtleties of flavor but they take time to develop.

Tasting this wine made this New Englander very curious to see what else Oregon has up its sleeve.  As I understand it, the weather can be tough on the growers there, so you have to give credit to winemakers who persevere.