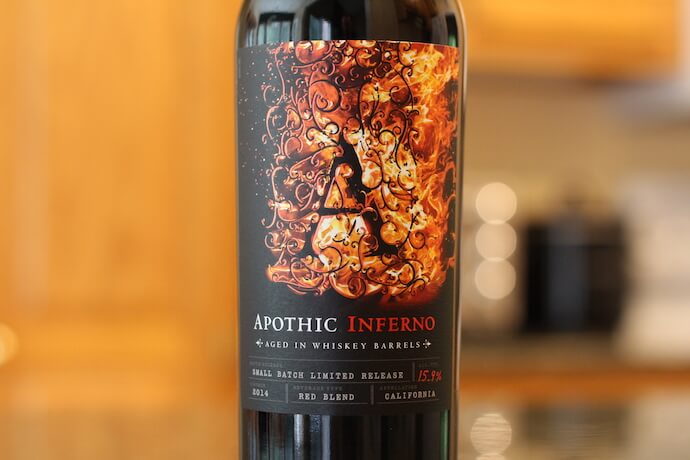 Apothic Inferno is a new Apothic wine that has come out as a small batch limited release.

SEE BOTTOM OF REVIEW FOR A 2019 RELEASE UPDATE

According to the bottle, Apothic Inferno is a red blend from California that has been aged in whiskey barrels for 60 days.

I’ve reviewed all the other Apothic Wine brands as well.  Here they are:

Apothic Crush (Apothic’s most previous release to Apothic Inferno.  I enjoyed this more than Apothic Dark.)

A new blend emerges from the flame of a time-honored craft, creating a most unexpected and masterful encounter.

I tasted the 2014 vintage of Apothic Inferno.

When poured, this wine exhibits a dark, cherry-red color.

Having gotten used to their often dark wines, I was a but surprised that this wine does let a decent amount of light come through.

The wine’s legs are slow to form, but once they start to drip they move down the glass pretty quick.  Although I did notice that some seemed to just hang on the glass and never started their journey south.

The wine’s aroma is not immediately noticeable upon pouring, although you do get a few subtle whiffs.

Different and enjoyable, though maybe a little metallic.

There’s definitely a good sting of alcohol in there.  It takes over your senses a bit after the initial aroma is sensed.

I must start out by saying that this wine’s taste pushes the envelope of what you’d expect from a red wine’s flavor.

You get a spicy mix of cinnamon, red and black fruits, and a definite maple bourbon note from the whiskey barrel aging.

Apothic Inferno coats your mouth with a one-two punch of silk and spice, making it hard to quantify the texture.

Tannins are more subdued than present.  I didn’t note a specific spot on the palate where they settled.

It’s definitely a long finishing wine, with the finish being carried by the flavors vs. the tannins.

Well, I kept going back for sip after sip almost to say “What the heck is this?”

However, as I was doing so I was certainly cognizant of the fact that I was enjoying it.

And, the aroma was getting nicer and nicer with less alcohol burn and more caramel on the nose as the wine had a chance to breathe in the big glass I use to taste-test.

Much like Apothics of the past, it’s novel in flavor.  But, having followed the brand so closely, I can see that they’re trying to balance uniqueness with staying power.

I saw that in Apothic Crush, in that it wasn’t so unique that you would only want it once in awhile.

I think they’re accomplishing the same thing with Apothic Inferno, but introducing the whiskey barrel aging in order to make it stand out amongst the cacophony of red blends out there these days.

So, bottom line, I really enjoyed it and I would drink it again.

Give it a go, but be prepared…  it stands alone in its unique flavor. 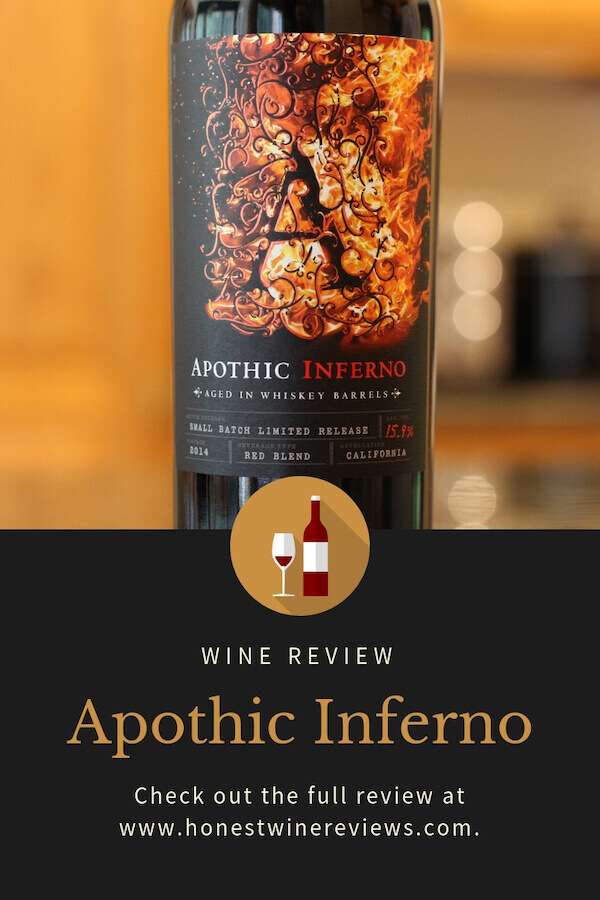 Given this wine’s spice and ability to stand on its own, I would pair this with honey glazed barbecued ribs.

SPECIAL UPDATE 2019: While previously a limited release, Apothic Inferno appears to be a permanent addition to the Apothic wines family.

Over the past several months I’ve been seeing it at most wine stores and local shops and it appears to be in full supply.

How about you?  Are you seeing this in your local area as a full time release?  Let us know in the comments, below.