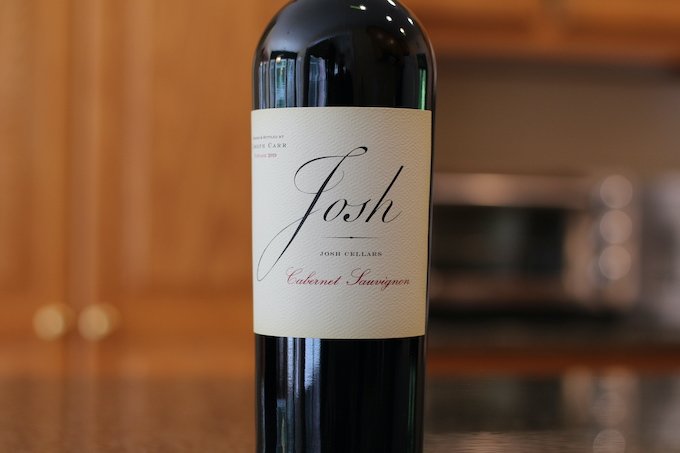 Josh was said to have “instilled the importance of family and hard work into his kids from a young age” which clearly had an impact on his son’s work ethic in launching Josh Cellars.

The Chief Winemaker for Josh Cellars is Wayne Donaldson and he took over winemaking there in 2009.

In 2021, Josh Cellars was named as the American Winery of the Year by Wine Enthusiast magazine.

I created my wines as a tribute to my dad, Josh.  He’s always on my mind. -Joseph Carr, Founder and Son.

I tasted the 2019 vintage of Josh Cabernet Sauvignon.

Josh Cab pours fairly dark with little to no light able to shine through the wine.

I would describe the wine’s color as a rich burgundy.

A tip and spin coated the glass fully and revealed plenty of slow falling legs.

I noted a toasty mocha aroma primarily, with additional whiffs of blackberry.

There’s was little to no burn of alcohol in the nose.

Josh Cabernet Sauvignon alcohol content 13.5% by volume, per the bottle.

I found this wine’s taste to be full-bodied, smooth and enjoyable with complex flavors of hazelnut, blackberry and the slightest hint of cinnamon.

This was exactly as promised by the tasting notes on the label, which is rare.

I often disagree with the label’s description of what to expect.  But this time it was spot on!

The wine’s mouthfeel was pretty juicy for a Cabernet Sauvignon with some nice round tannins in there as well.

Typical for a bold, juicy Cabernet Sauvignon, this wine had a long finish.

It was equally balanced by the flavors and the tannins.

Overall, I really enjoyed Josh Cabernet and now know why it’s so popular!

It delivered on all aspects, from nose to palate with a nice complexity of flavors and a wonderful smoothness.

If you’re looking for a good under $20 wine that could easily compare with something more expensive, definitely consider Josh Cab.

For me, this wine is a total patio or back deck sipper on its own.

But you could easily pair this wine with a nice grilled steak as it has the structure to hold its own with such a dish.