For this review we tasted the Robert Mondavi Private Selection Cabernet Sauvignon 2010 from the Central Coast region of California.

According to the winemaker their grapes from the Central Coast vineyards benefit from soils that are volcanic and consistent.

Additionally, distance from the coast results in a helpful cooling fog.

The 2010 growing season was said to be one of the coolest on record.

All together this makes for “the perfect blend of rich fruit and bright acid” per Mondavi. 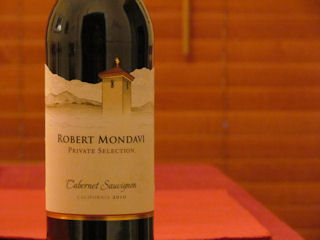 The cork was soft and came out clean, with a bit of a splatter.  No wine ring at all on the inside end.

In the glass, the wine was a deep plum.  It appeared robust and very leggy.

The wine’s aroma was good, strong and lingering.  Hints of earthy, oaky berries were noted.

We let the wine breathe for 5 to 10 minutes before tasting.

When we tasted the wine, we noted blackberries and mellow spice.  The oak was from the aroma carried through to the taste.

The wine’s tannins were forward and sparkling.

Robert Mondavi Private Selection Cabernet is a little dry with a cottony mouthfeel.

We determined that the finish was short to medium.

Overall, we felt Robert Mondavi Private Selection Cabernet Sauvignon is a very enjoyable wine.  Its strengths lie in the aroma and the taste.

As most wines from the Robert Mondavi winery turn out to be good, we weren’t surprised that we enjoyed this one as well.

Pair this with a good rib eye, roast duck or a steak on the grill and you can’t go wrong!