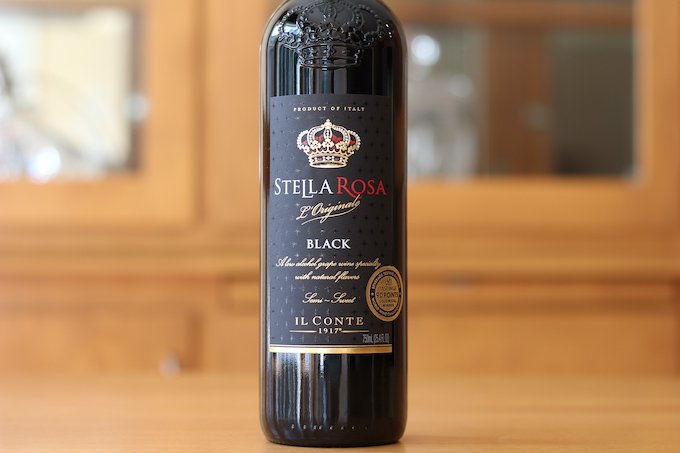 Billed as a low-alcohol grape wine specialty with natural flavors, this semi-sparkling wine comes with a twist-top and a calorie label on the back.

And if you’re interested in knowing, a 5oz. pour contains 110 calories!

Its ingredients included:  wine, water, grape must, and natural flavors, among other things like grape skin extract for color.

I took this to mean that the natural flavors of blackberry, blueberry, and raspberry (as claimed by Stella Rosa) in this wine, don’t come from adding in those juices.

The back label does say “combined with natural flavors” of those fruits, so they must introduce them to the winemaking process somehow.

Stella Rosa Black is seductive, rich and full-bodied with a hint of sweetness.  Serve chilled with fresh fruit, cheese, spicy cuisine, and desserts.

Per the instructions, I chilled this non-vintage, semi-sweet, semi-sparkling red blend wine before tasting it.

In the glass, this wine purple in color.

As it is a semi-sparkling wine, you’ll see plenty of bubbles after pouring.

However, they don’t continue to rise in the glass like a Champagne would.  It’s more like a fizz on top that slowly dissipates.

And absolutely no aroma of alcohol on the nose.

Stella Rosa Black alcohol content 5.0% by volume, per the bottle.

The wine’s taste was kind of like a thirst-quenching grape soda with the flavors of blueberry and raspberry mixed in.

However, it had substantially less carbonation than a soda would.

Still, quite crisp though.

There were no noticeable tannins and the mouthfeel could best be described as fizzy.

The concept of “mouthfeel and tannins” probably doesn’t apply to a beverage like this.

The flavor does linger in your mouth for awhile.  It’s more fruity than wine-like.

It’s like drinking a grape soda.  And, since the alcohol level is so low, you don’t feel guilty for drinking it like a soda.

And even though it’s carbonated, it’s nothing like a true sparkling wine or even a bubbly Prosecco.

It reminds me of Riunite, but much better tasting.

Stella Rosa Black price $11.99 and I picked it up at my local wine store.

Wow!  Given all the pairings they suggest, I’m wondering what you shouldn’t pair this with…  Any ideas?