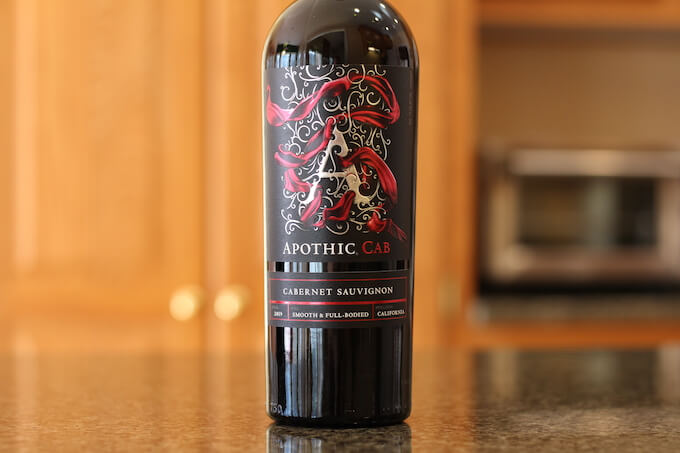 Apothic Cab is Apothic’s take on the Cabernet Sauvignon varietal.

While they have others that have Cab in the blend, this is their first wine that’s labeled as Cabernet Sauvignon only.

By the way, I’ve reviewed many of the other Apothic Wines.  Such as:

Apothic Dark (A mysterious red blend with a novel taste.)

Apothic Crush (Another red blend, which I liked better than Apothic Dark.)

Apothic Brew (A coffee infused red blend that some are saying is becoming hard to find.)

Immerse your senses in this smooth Cabernet.  Hints of jammy dark fruit and aromas of vanilla blend with a silky smooth texture that boldly lingers on the palate.

And, SPOILER ALERT, the bottle label notes are spot on.

I tasted the 2019 vintage of Apothic Cab Cabernet Sauvignon.

Some light did shine through, but overall it looked like a Zin / Cab blend would look.

Legs were very slow to fall and close spaced.

The wine’s aroma was medium in intensity with a definite hint of vanilla.

I also picked up some initial, very light, gumdrop spice when I first opened the bottle.  It quickly faded.

Additionally, there was little to no burn of alcohol in the nose.

Overall, a pleasant and not too “in your face” aroma, which I guess is what I was expecting.

On the palate, I sensed notes of caramel and vanilla that sat along with the jammy dark red fruits you’d expect from this wine.

I also noted a hint of mocha mousse.

While certainly on the sweeter side, I wouldn’t call it a sugar bomb.  But almost…

Overall, very tasty and much more refined than other Apothic wines I’ve tasted.

Mouthfeel was quite smooth and silky.

Tannins were pretty much impossible to find.  Which caused me to wonder if maybe there was some extra filtration that occurred with this wine.

My Overall Opinion of Apothic Cab

Overall, I found this wine to be very enjoyable.  It may even be my favorite Apothic wine so far.

I can see that Apothic went for a more refined red with Apothic Cab and I can appreciate that.

It’s difficult to find the “official” varietal compositions for Apothic wines, but I can tell this is definitely not a straight Cabernet Sauvignon.

It’s more of a “twist” on Cabernet Sauvignon, as they go on to say on the bottle label.

Most likely it’s a blend that’s primarily Cab.  Perhaps 80%.  But I would guess also Merlot, Zinfandel, and/or Syrah.

It’s just too jammy to be a straight Cab.

What it is though, is a smooth sipper that I believe will appeal to many.  Especially given the just under $10.00 price tag.

Like most Cabernet Sauvignon or Cab blends, Apothic Cab will pair well with any roasted or grilled red meats.

It would also play nicely as a silky fireside sipper on its own.