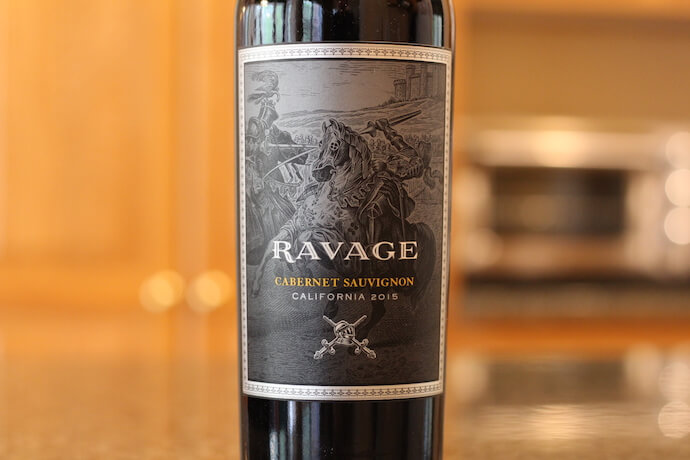 It’s aged in 100% new French oak and is actually a blend of several varietals.  More on that below…

Funny story, when I was first contacted about this wine I thought the email I received about it was spam!  The subject line was “Conquer Summer Nights with Ravage.”

I figured it was about male enhancement.  ;-)

Fortunately, my contact reached out again and this time I opened the email.  (Hey, no harm in looking, right?)

Anyway, once I realized what the email was really about, I was happy to give the wine a try.  Which leads me to my next subject…

Wine being marketed directly to men.

I have a feeling the idea caught fire after seeing the popularity of the Apothic Wines and their masculine labels.  Not to mention one of their wines that had a slight bourbon taste to it.

As further evidence of this, I recently reviewed a Zinfandel called Cigar.  While it’s not to say all women dislike cigars, I think it’s fair to say that cigars are more of a “guy thing.”

And finally, I’m noticing that the marketing materials for some of these wine brands state that they’re specifically targeting men.

So, in my opinion, definitely an emerging trend and time will tell if it sticks.

OK, with that said, back to the review…  Let’s taste this bad boy!

As I was expecting, Ravage’s appearance was very dark.  Like, squid-ink dark in the glass.

There was a dark purple meniscus and pretty much zero light was able to shine through the glass.  Tipping and swirling the wine in the glass resulted in a purple coating that clung to the glass quite nicely.

The aforementioned tipping and swirling released a burst of aroma that lasted for quite some time.

I had also noticed the aroma immediately when I opened the wine.

From a foot or so away from the glass I noted bold dark fruit aromas.

Up close, the aroma was similar but of course stronger.  Added were slight wafts of mocha.  Pungent and thoroughly enjoyable if you like a bold red wine.

A deep whiff revealed a bit of alcohol burn in the nose.

Ravage Cabernet Sauvignon alcohol content 13.5% by volume, per the bottle.

The wine’s taste was less dark than I was expecting.  A bit of a fruit bomb, but I was expecting the nuclear option (so to speak) in terms of fruit.  I was pleased that didn’t occur.

In terms of flavors, I picked up more dark fruits, some vanilla from the French oak, and cranberry which I had to think about before realizing what it was.

All in all, quite enjoyable.

I was expecting I’d be saying the mouthfeel was creamy, but in fact I chose to go with milky instead.  It just wasn’t as heavy as I thought it would be.  And that was OK by me.

Tannins were velvety and evenly distributed on the palate.  As the tasting notes stated, “soft enough to add balance, while giving structure and depth.”

Ravage Cabernet is long finishing as one would expect.  It’s dominated more so by the flavors than the tannins.

Overall, I went in skeptical, but after tasting it I really liked it.

What pleased me most was the balanced boldness of this wine and the fact that it wasn’t as “in your face” as I was expecting.

I also liked the subtle cranberry flavor.  It’s muted, but it’s in there, and I enjoy hunting for surprises when it comes to wine flavors.

Ravage Cabernet Sauvignon price $11.99 making it a great Under $20 choice.

Pair this wine with char-grilled meats and slightly sweet BBQ.  (I stole that from the tasting notes, but I agree)

Perfect for a guys night at the barbeque.  (OK I stole that too!)

Honestly, you could just sip this around the fire pit too.  That would be just fine.  Which reminds me, I have one of those in storage under the deck…  time to get it out!

Hmmm…  Maybe this “marketing to guys” thing isn’t so bad!  It seems to be working on me.