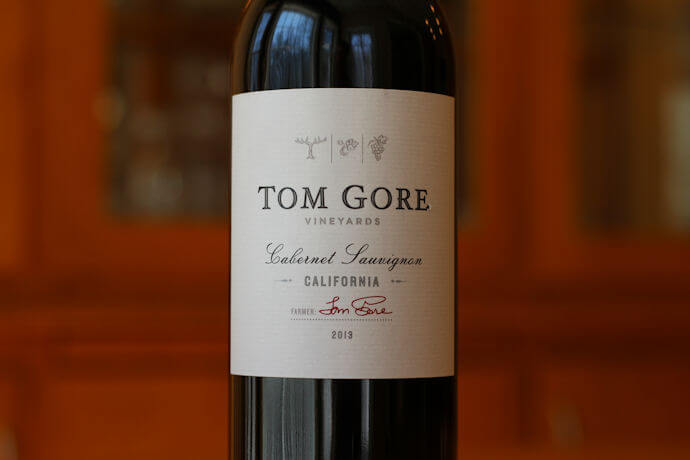 Tom Gore Cabernet Sauvignon is one of a series of three wines from Tom Gore Vineyards that I’ve reviewed.

The first was Tom Gore Field Blend which I really enjoyed and the other was Tom Gore Chardonnay which was also quite enjoyable.

I’ve also reviewed Tom Gore Sauvignon Blanc which had a nice surprise to it.

Great wines aren’t just made, they’re grown.  Tom Gore has followed in his father’s footsteps, working every harvest since age 7 to become the farmer he is today growing exceptional grapes and making great wines.  You can taste the craft of careful farming in every glass of this velvety Cabernet Sauvignon with flavors of blackberry and dark chocolate.

For more info, check out the Tom Gore Vineyards website.

For this review, I had help from my good friend Miss Jonelle and her keen wine tasting palate.

We tasted the 2013 vintage of this California Cabernet.

It had been awhile since I’d had the perspective of a female tasting partner, so I was very happy to have her help me with this review.

As we proceeded through the review we soon discovered differences in our opinions of this wine.

Upon pouring, we quickly saw that this wine was very dark in color.

We described it as dark ruby with a garnet colored rim.

The wine’s legs developed slowly and were thin, evenly spaced and numerous.

On the nose we encountered a little tobacco and another subtle aroma that we couldn’t quite place.

After giving it some thought and a few more sniffs we came up with pomegranate.

The alcohol in the aroma was noticeable.  We called it a medium non-offensive sting to the nose.

Overall, the aroma is light with this wine.

For Jonelle, there weren’t any significant fruits or flavors that came through.  She noted that the wine was dry to her and the taste did not jump out, much like the aroma.

For myself, I found the wine’s taste to be subdued with perhaps some subtle mocha or black cherry.

I was pleasantly surprised that there wasn’t much alcohol in the taste and called the wine “juicy.”

For Jonelle, the mouthfeel was dominated by the wine’s tannins.  She called them moderate and said they made her tongue feel all tingly.  She especially noted the wine’s effect on the tip of her tongue.

For me, I called the mouthfeel milky and felt the tannins were more soft.

We clearly had different experiences.  Neither right nor wrong, just different.

We both agreed the wine finished long.

Overall, Jonelle didn’t really care for this wine.  She said she was a little overwhelmed by the tannins.

I liked it quite a bit.  I felt it had great drink-ability and strength in its subtlety of flavor.  I also really enjoyed the juiciness of this wine.

Having said that, if you gravitate to a big bold flavorful Cabernet, then this wine may not be for you.  It’s much softer, in my opinion.

Jonelle and I gave a lot of thought as to what to pair with this wine.

Because this wine is more light than bold, we decided on artisan flatbread pizza with green peppers and mushrooms.

On top of the crust use either fresh tomatoes on their own, or a light and fresh tomato sauce.

We thought that with this pairing you may find the wine’s fruit entry to be more noticeable.