From Casella Wines in Australia, this review is of Yellow Tail Moscato.

Casella Wines’ roots go all the way back to 1870 when they first started planting grapes in Italy.  In the late 1950’s the family made the move to Australia.

In the mid 1990’s the family built a new winery and is now up to their 6th. generation of family wine making.

The “Yellow Tail” part of Yellow Tail Moscato comes from the golden tail color of the yellow footed rock wallaby, which is an animal similar to a kangaroo in Australia. 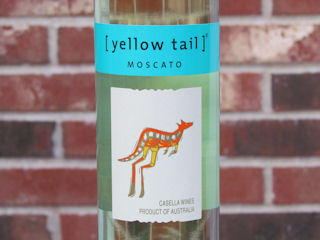 Some time ago I reviewed the Yellow Tail Cabernet and was rather lukewarm on it.  But, I always wanted to come back and check out other Yellow Tail wines.  So, I chose the Moscato first, as it’s a very popular wine.

I opened the twist top and poured.  In the glass Yellow Tail Moscato is very light golden in color.  I noted a small amount of effervescence both in the glass and in the bottle after I opened it.  I would describe it as lots of tiny bubbles ringing around the surface of the wine.

I really had to get my nose into the glass to smell the aroma.  I mostly noticed pear and there was little to no whiff of alcohol.  Alcohol content of Yellow Tail Moscato is 7.5% by volume per the bottle.

The wine’s taste started tart with flavors of ripe green apple.  Immediately following that were the sweeter tastes of pear and tropical fruits.  Maybe a bit of tangerine, too.

I was expecting the flavors to be more crisp, however I wasn’t tasting it chilled.  It’s recommended that this wine be served chilled and I would agree with that.

Finish of the Yellow Tail Moscato was long and the sweetness lingered all over the palate.

Overall, I found the wine to be a very smooth drinking Moscato.  There were no positive or negative surprises.  It’s very approachable and is likely enjoyable to the masses.  If you like a white wine that’s on the sweeter side, this would be perfect for you.

This wine would go great on its own at Happy Hour or with a light salad.  Also, with dessert.  Definitely serve it chilled to get that “zingy and crisp” feeling the bottle suggests.